Back in the day, sophisticated surveillance systems were made exclusively for businesses and wealthy homeowners, but today, there are literally hundreds of inexpensive security cameras. Now, you can leave your home while knowing exactly what’s going on in real-time.

In this article, we’re going to focus on one such security camera that doubles as a floodlight produced by Ring. The company is mainly known for their doorbell cams but has expanded into the camera-floodlight industry, and they seem to be doing a pretty amazing job. Based on its reviews from numerous satisfied customers, there don’t seem to be very many things to dislike about this model. Let’s see what makes this floodlight security camera so great.

Any Futurama fan would love to own one of these cameras for its similar appearance with Roberto the stabby-stabby robot. Other than that, there’s really nothing too amazing about this floodlight’s design. Two LED lights are attached to a semi-sphere base by arms which can twist to aim the direction of the lights. The camera, microphone, and speaker are all encased in a rectangular metal housing that sits just below the floodlights.

One major flaw that we’ve noticed about security cameras with this sort of design is that moths and other bugs tend to fly around the camera and sometimes block its view. The worst thing is when these bugs activate the super-sensitive sensors of the cameras, illuminating your porch with LED beams throughout the night. Good thing you can adjust the sensitivity (more on this later) but you can’t do much to prevent bugs from being attracted to bright lights.

Setting up the Ring security/floodlights is simple – just screw a metal ring into the junction box where the half-dome base connects. The base needs to be held up temporarily as you attach wires to the lights and camera. It sounds a bit troublesome, but really it’s easier than it sounds. The only complicated thing would be hardwiring the lights to your home’s electrical system. If you’re allergic to getting shocked, hire an electrician.

After you’ve properly set up the lights outside of your home, you need to connect the camera to your home’s Wi-Fi and using the Ring app on your smartphone. In the app, you can specify your address, alerts, and sensitivity.

Speaking of sensitivity, the worst thing about sensors is that anything – ANYTHING – can trigger the floodlights to activate. You can determine how sensitive the sensors are through the Ring Smartphone app. The sensitivity of the camera ranges from slight movement like a passing dog to extreme movement like someone boogying in front of your porch. If you’re leaving your home unattended, you’d probably want to set it somewhere in the middle as to scare away potential burglars moving towards your home but not give poor, innocent raccoons heart attacks.

One thing that really sets this product apart from its competitors is the ability to specify motion zones. If you’ve ever had security cameras that send alerts to your Smartphone, then you may have been annoyed that even the tiniest movement in the very edge of the camera’s view will trigger an alarm. This isn’t the case with the Ring security camera; instead, you can determine motion zones which, when motion is detected in said zones, will let the camera know to alert you via the Ring app.

You know what the worst thing about security cameras used to beYou couldn’t distinguish a person’s face from a lumpy potato. But since technology has developed more rapidly than anyone in the 1990s could ever imagine, now security cameras can catch thieves and other ne’er-do-wells in HD. This Ring floodlight camera captures and records images in 1080p. Colors and facial features are easily identifiable.

The camera has a 140-degree FOV which is quite narrow compared to other security cameras, but it does capture a wide enough image to grasp the full context of what’s playing. Basically, if you set the camera up correctly, you’ll be able to see your entire backyard with the Ring’s floodlight security camera.

As we mentioned earlier in the article, there aren’t a lot of things to dislike about this security camera, but there are still some areas where this camera-floodlight needs fixing. One such thing is the night vision recording which is admittedly as crisp as daytime images, but smaller features can get a little jumbled. When looking at night vision recordings, we could easily identify whether a male or female passed in front of the camera but their facial features were somewhat indistinguishable.

You might be wondering where the video is saved at the end of the day. It all goes to Ring’s database which you can have full access for the cheap price of $30 a year or $3 per month. This subscription package includes storing footage for up to 60 days per camera that you can share with others if you’d like.

If you don’t want to subscribe to any storage plans, then you can only watch footage from the camera via your Smartphone in real-time. There’s no built-in memory or slot for external memory – you watch things as they’re currently unfolding.

If you think that paying for footage of your own property sounds like a rip-off, it’s actually not a new concept. All modern security/floodlight manufacturers have their own centralized databases where footage is stored and accessible through subscribing to a storage plan.

So what do we think about this camera/floodlight combo from RingFirst of all, there’s no denying that the adjustable sensitivity of the sensors is a major plus, and the ability to determine your own motion zones is definitely an attractive feature. Are there drawbacksOf course, there are. No product is perfect, but we feel that the benefits that this security camera offers, especially if you subscribe to their storage package that offers up to 60 days of footage, is a step beyond many other models. 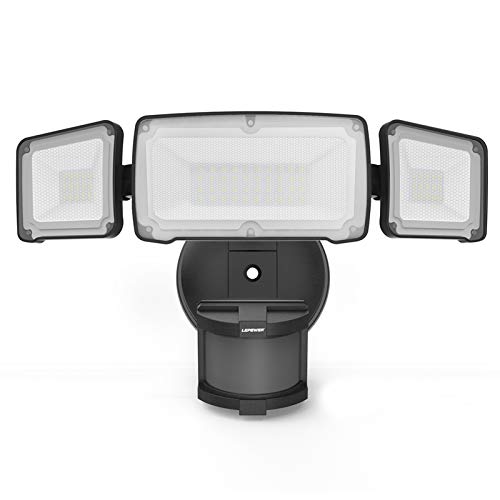