Do you know what the worst part about having a huge lawn is? Dealing with fallen leaves. If only someone could invent a tree that dropped all its leaves into a neat pile for you to bag and throw away. In the meantime, we’re left gathering the leaves with a rake, and spending hours under the hot sun. Of course, if you had a quality leaf blower, then you could cut your work time by more than half.

Today, we’re going to compare two rake blowers from two of the world’s most popular garden tools manufacturers: the Greenworks 24012 and the BLACK+DECKER LB700. They’re both extremely easy to use, straightforward, produce excellent leaf-blowing power, and hardly weigh anything. So if they have so many similarities, which of the two should you getLet’s begin comparing them.

Greenworks 24012
The first thing to consider is how powerful the tool is. The Greenworks features a 7-amp motor that produces blows winds of up to 160 MPH at 150 CFM. Essentially, this residential-grade leaf blower works extremely well at pushing leaves across large yards.

BLACK+DECKER LB700
The B+D also comes equipped with a 7-amp motor but produces 180 MPH at 180 CFM. This tool, lie the Greenworks, can shoo leaves and other lightweight debris across large yards from a distance. Pretty hand if you don’t feel like moving around too much under the sun.

Conclusion: Technically, the B+D is the more effective tool at pushing more leaves than the Greenworks, but realistically, their performances are identical. From the same position, we found that both leaves, despite their speed and air volume ratings, can push any yard litter away up to similar distances.

Greenworks 24012 and BLACK+DECKER LB700
Remember how we said that these tools were straightforward. What we meant was that neither of them is equipped with additional features other than blasting high-speed winds. Unfortunately, both the Greenworks and the B+D do not come with variable speed features so you’re stuck with working at a fixed 160/150 in the Greenworks and 180/180 in the B+D. The good thing is that neither of them has enough power to knock you down when using them despite their more-than-100-MPH blowing capacities. The bad news is that if you don’t have control over how hard the tools will blow, so you could end up scattering leaves if you’re not careful.

Greenworks 24012 and BLACK+DECKER LB700
The Greenworks and B+D weigh 4.4 pounds and 4.5 pounds respectively. For a leaf blower, both of these models can be considered lightweight. They’re easy to operate using a single hand, so there’s virtually no risk of experiencing fatigue or shoulder pain when carrying and operating these tools.

Greenworks 24012 and BLACK+DECKER LB700
One of the biggest annoyances when using a corded leaf blower or any corded garden tool is venturing too far away from the power outlet that the cord becomes unplugged. To solve this problem, both these leaf blowers come with a cord retention system that makes the cord virtually un-pluggable. You’ll feel a slight tug by the cord which will indicate that you need to either come closer to the outlet or unplug it and move it to another spot. 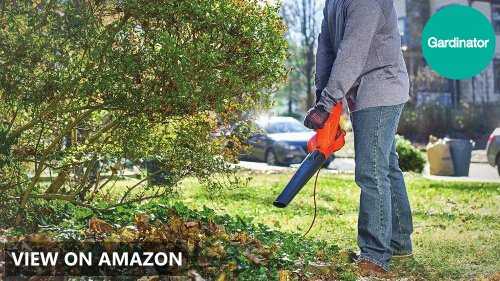 Greenworks 24012 and BLACK+DECKER LB700
While we’re talking about power cords, one thing we need to mention is that both of these are sold as bare-tool kits. By bare tool, we mean there’s NO… FREAKING… POWER CORD! How ridiculous is that?! If you want to use any of these units straight out of the box, you MUST purchase their power cords separately. So if you’re attracted to low-price leaf blowers (both of them are extremely affordable), just know that it doesn’t include a power cord (which is inexpensive as well).

Greenworks 24012
Even though electric leaf blowers produce considerably lower noise levels than their gas counterparts, they can be quite loud. Fortunately, neither of these two models makes very much noise. At its maximum setting (160 MPH at 150 CFM), the Greenworks is about 97 decibels – about the same noise level as a passing jet.

BLACK+DECKER LB700
The B+D, on its highest setting (180 MPH at 180 CFM), produces a surprisingly moderate drone of 86 decibels which is about the noise level of a passing motorcycle. So despite being the same weight class, same sized motor, but blowing more powerful gusts of wind, it’s not as noisy as the Greenworks.

Conclusion: However, how important, is noise level production. Everybody who’s ever used or has been in the vicinity of a leaf blower knows that they’re loud. Speaking from a technical standpoint, the B+D will be less likely to disrupt your neighbors than the Greenworks, but neither of them is exactly quiet.

Greenworks 24012 and BLACK+DECKER LB700
If you need a versatile tool that can blow and vacuum up leaves in preparation to create mulch, then neither of these tools is for you. They are both one-trick ponies that push leaves away from lawns, driveways, patios, and other surfaces. Not that it’s a bad thing, but they’re just not as versatile as other leaf blower models available.

So now comes the difficult part: deciding which of the two would be the better leaf blower to have. The thing to note is that both of them are identical in so many ways (corded, lightweight, NO POWER CORD, power cord retention, etc., etc.) that you hardly need to think about it. However, when considering their respective airspeed and volume ratings, we find that the B+D would be better suited for cleaning tasks in larger yards and patios, whereas the weaker performance specs of the Greenworks make it fitter for smaller debris-blowing jobs.

They are both straightforward tools that don’t have mulching or suctioning abilities, so the best you can do is push leaves to one area and manually bag them or turn them into mulch. Not that everybody needs mulching and vacuuming for their leaf blowers. But considering their super-inexpensive price tags, we feel that even without the power cord, either of them would be nice leaf blowers to have. 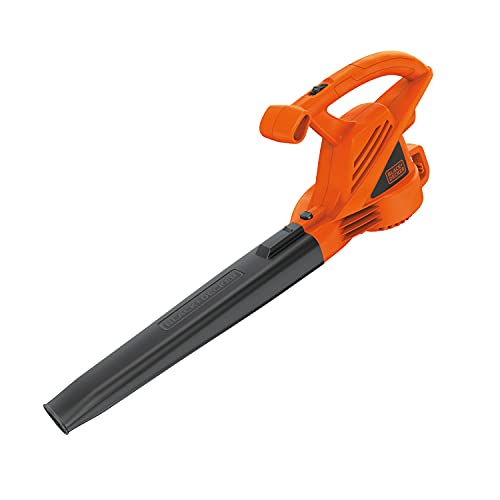 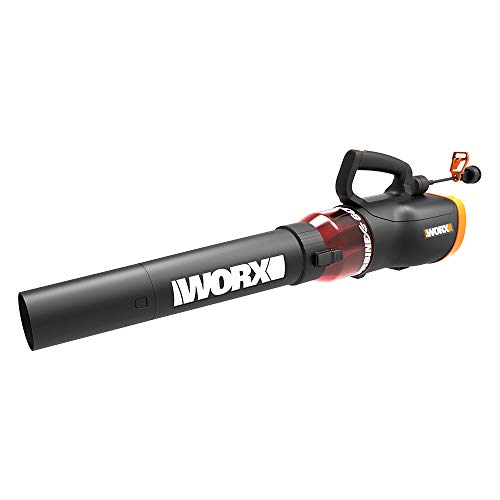