You don’t need to have the knowledge of a seasoned farmer to start a garden in your backyard. All that’s required is a bit of initiation, the right tools, and a ton of patience.

Unfortunately, patience is one thing most beginner DIY gardeners lack due to soil problems. Compacted soil or hidden roots can be the biggest obstacle to any gardener. Aerating and manual de-rooting can excruciating unless you have a tiller/cultivator.

This tool can aerate, lift roots, and crumble clumped-up soil in hardly any time at all. You can say goodbye to spending hours under the scorching sun while being nose-deep in dirt as long as you have a handy tiller/cultivator at your disposal.

Before you go shopping for a tiller/cultivator, it’s important that what the different types are and what they’re each designed to do. Tiller/cultivators can fall into one of two categories – electric and gas.

Cordless tiller/cultivators are the more portable type of electric tiller/cultivator. Their onboard battery allows them to travel the four corners of the world without stopping. Unless, of course, the battery is out of juice, then you need to head back to the charging station to refuel. Their motors are also weaker than their corded-counterparts, but for light-duty tilling and soil prep, this can be an excellent tool to have.

In general, electric tiller/cultivators are significantly weaker than their gas-powered counterparts, but “weak” doesn’t necessarily mean “bad.” Their motors are typically between 2.5 and 9 amps, and their tines – either steel or hardened plastic – can reach as deep as 10 inches and can clear paths as wide as 18 inches. For most DIY gardeners, an electric tiller/cultivator will provide enough tilling and digging power to aerate even the clumpiest dirt in their backyards.

Unless you plan on working on an industrial-level farm, the only gas tiller/cultivators worth looking at are the simple push or pull models and nothing that requires towing behind a lawn tractor or ATV. Some entry-level gas-powered tiller/cultivator models have engines of between 1 and 3 HP. Their steel tines are long enough to reach depths of up to 10 inches and clear paths of up to 16 inches. Like their electric counterparts, entry-level gas tiller/cultivators provide more than enough power to destroy compacted earth and introduce enough oxygen to the soil to support plant growth.

Like any gas-powered tool, you need to think long and hard about whether a gas tiller/cultivator is the smart purchase decision. In addition to the initial cost of the machine, you need to take into account maintenance costs, fuel costs, oil costs, etc, unlike electric tiller/cultivators which require no lubricant and very rarely experience maintenance problems that aren’t covered by the manufacturer’s warranty.

So is a Gas-Powered Tiller/Cultivator Worth it?

The type of soil matters when choosing between electric and gas tiller/cultivators. If the soil in your yard is naturally airy or non-compacted, then a lighter electric tiller/cultivator can work beautifully to aerate your soil. However, if you’re dealing with large patches of compacted soil or even clay, then a gas model would be the better option.

Well, what about rocky soil or soil littered with dead rootsWhen dealing with dense objects lying beneath the surface, your best bet would be to get either an electric or gas model which comes with or has the ability to use a chisel tine. This type of tine will lift and toss rocks, roots, toys, bones, etc. out of the soil so oxygen can flow more freely.

Since the clearing width of each type of tiller/cultivator is different, you need to decide how large a patch in your yard you plan on turning into a garden. A wider tiller/cultivator means clearing patches of land quicker, but if you plan on making an ultra-small garden, enough for a few crops and flowers, than a narrower tiller/cultivator will suffice. If you’re an aspiring farmer with acres and land, then ditch electric and entry-level gas tiller/cultivators and invest in one of the heavier-duty, tow-behind tillers made to till several yards of soil with each pass.

Even though electric and gas tiller/cultivators are roughly the same size, they have different storing needs.

Electric tiller/cultivators are the environmentally friendlier option since they don’t use fossil fuels and don’t release toxic fumes into the atmosphere. Because of this, it’s safe to store one of these babies in your shed or garage when it’s not in use. Many electric models come with collapsible handles to further reduce the amount of space it takes up.

As for gas tiller/cultivators, you’re dealing with a machine that releases carbon emissions when in use and even after the machine is turned off. Storing them indoors is not a good idea, regardless of how ventilated your shed or garage is. Instead, it’s safer to leave these bad boys outdoors and chained up (beware of tiller/cultivator thieves).

We apologize for answering your question with a non-committal answer, but deciding whether your garden would benefit more from a gas tiller/cultivator is a decision only you can make. The most important thing to take into account when deciding between electric or gas is the type of soil in your yard. If you’re pulling muscles before you’re pulling out roots or rocks, then a gas tiller/cultivator might be the better option. The clearing capacities of each type of tiller/cultivator come second after knowing what sort of condition your yard’s soil is in. 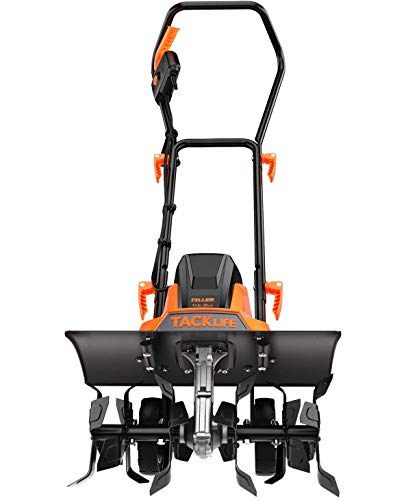