Nothing makes quicker work of cleaning up bushes and hedges than a cordless hedge trimmer. This garden tool is lightweight, easy to control, have long 20-plus-inch blades for quick trimming applications, and have an extremely long battery life for trimming more than 2,000-square-feet of hedges on a single charge. When you need to clean up your hedges but want to keep away from the scorching sun, a cordless hedge trimmer is the tool for you.

This time around, we’re going to look at two of the most popular cordless hedge trimmer models on the market – the BLACK+DECKER LHT321FF and the DEWALT DCH820P1. Between the two models, there are several overlapping specs that we’ll discuss, but what sets them apart from each other should help you decide which of these tools would work best for you. Let’s jump right into our comparison. 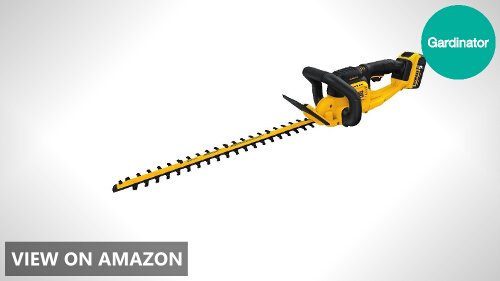 BLACK+DECKER LHT321FF
The blades of a cordless hedge trimmer reciprocate, causing a scissor-like swing of the blades for trimming small branches. Like a reciprocating saw, the higher the SPM, the more efficiently it will perform. The BLACK+DECKER delivers up to 2,400 SPM, which isn’t precisely the highest SPM-count you’ll find, but it works plenty well for most hedge-trimming jobs.

DEWALT DCH820P1
The DEWALT delivers up to 2,800 SPM. Because the unit offers more strokes in each minute, you can swing the blade around much quicker for finishing up trimming jobs sooner. Not many cordless hedge trimmers have an SPM-count of 2,800, so it’s safe to say that this DEWALT model may be one of the quickest models available.

Conclusion: Both of these hedge trimmers use a dual-action motion (two sets of blades reciprocate parallel to each other) so a high SPM-count would mean quicker scissoring. The DEWALT’s 2,800 SPM is the quicker and more time-saving model of the two, though a minor 400 SPM-difference doesn’t mean much in the hedge trimmer game. 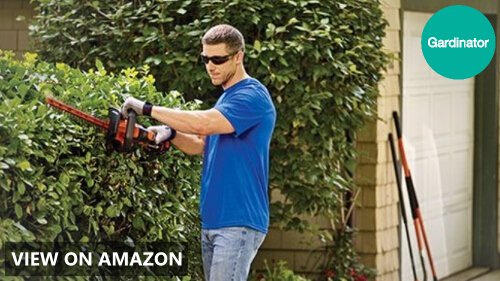 BLACK+DECKER LHT321F and DEWALT DCH820P1
The general belief is that a longer blade makes quicker hedge-trimming. Although it’s true that a long blade with more teeth will clear more branches and leaves than a shorter one in the same amount of time, users need to consider the added weight, balance issues, and maneuverability of longer blades. The good thing is that between the BLACK+DECKER and the DEWALT, you don’t need to consider whether one’s blade’s length is superior to the other since they both feature 22-inch blades.

Conclusion: This is just to give you a rough idea of the controllability and the cutting capacity that each of these units has. They both come with similarly sized blades and a cutting capacity of up to ¾ of an inch to slice through even the thickest hedge branches.

BLACK+DECKER LHT321F
Like with any power or garden tool, safety should be your first priority. There’s only so much a hedge trimmer manufacturer can do to ensure safe operation of their tools, and the rest is up to the operator to wear PPE and use common sense. Apart from the wrap-around handle and guard (two safety features most hedge trimmers come with), the BLACK+DECKER also features a lock button to prevent starting when you accidentally press the trigger.

DEWALT DCH820P1
The DEWALT comes with a wrap-around handle and guard as well, but it’s missing a lock system to prevent accidental starting. This model is built for experienced users for both residential and commercial applications, so to get work done quicker, there’s no extra button to push to get to work.

Conclusion: Honestly speaking, how many seconds are you going to save without a lock buttonWhatever the answer is, it’s immaterial compared to the added safety you get from the BLACK+DECKER’s lock mechanism. First-time users might experience that moment where they pull the trigger while holding the unit carelessly, so these users should consider getting the BLACK+DECKER just for their extra safety insurance.

BLACK+DECKER LHT321F
No matter how quick the blades reciprocate or how powerful the blade’s teeth clamp down on branches and leaves, there’s going to be at least one moment when the tool will stop abruptly because of a minor jam. Most of the time, it’s too many small branches caught between two teeth, preventing the unit from working any further before shutting off the unit and pulling the offending branches out.

Lucky for us, BLACK+DECKER has thought of an innovative way to get past such a situation without stopping operations. The LHT321F comes with a POWERCUT button which delivers extra power in short bursts for slicing through even the roughest, toughest, thickest bush and hedge branches. However, it’s not something you want to use all day long since it drains the battery pretty quickly.

DEWALT DCH820P1
Unfortunately, the DEWALT comes with no such feature. You’re either stuck trying to cut your way through an obstacle while risking chipping your blade’s teeth, or you have to manually pull out the branches from the blade before resuming work.

Conclusion: Obviously, BLACK+DECKER’s POWERCUT button makes quick work of otherwise a tedious task of removing branches and leaves from a hedge trimmer blade. Pressing the POWERCUT button will drain more of the tool’s battery, but it’s not such a big deal that you’ll complain about poor battery life (note: both of these units’ batteries require less than an hour to full charge, and they have tremendous battery life). 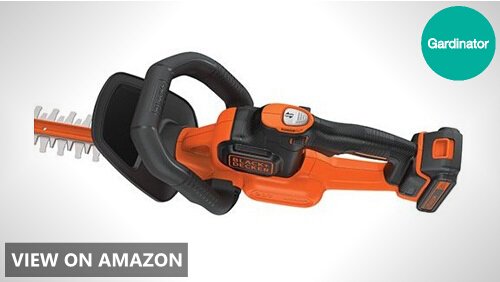 To the untrained eye, the BLACK+DECKER LHT321F and the DEWALT DCH820P1 appear to be the exact same tool (22-inch dual-action blades, 20V rechargeable Li-Ion batteries, around 7.5 pounds, wrap-around handles and safety guards, as well as touch-sensitive triggers). However, the two largest differences between BLACK+DECKER and DEWALT (lock function to prevent accidental starting and POWERCUT) make the BLACK+DECKER the better option.

For your everyday hedge- and bush-trimming, both of these models are excellent choices, but the BLACK+DECKER comes with additional safety and power features that the DEWALT can’t match. For this reason, we feel that the BLACK+DECKER LGT321F is definitely the better buy. 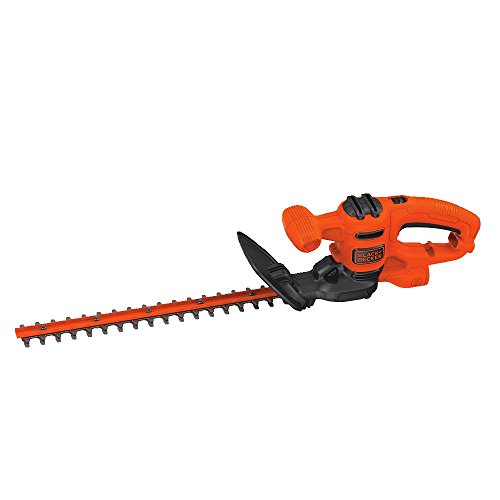