Just when you thought all you need is a shovel to clear fallen snow on your driveway, a particularly heavy bout of snowfall hits your area, and you are left with an entire driveway and front yard packed with accumulated snow. The next thing you know, you have already spent hours outside, in the cold, and you’ve barely made a dent in all that accumulated snow. Your entire body is now aching, compounded by the cold of winter chilling you to the bone. Then you start wondering why you did not give in to the urge of buying a snow blower.

Its human nature to have these thoughts after being hit by the consequences of a decision you have made. Perhaps your argument before was that getting one seems like overkill. Besides, you’ve always believed that your shovel can do the job perfectly, so why spend the extra amount on a snow blower

Before we get to understand the single stage snow blower, particularly how it works and why it should be your snow blower of choice, let us briefly take a look at the other types of snow blowers available on the market today.

Heavy snow drifts, especially those that take place in areas with slopes and uneven terrain, usually call for a two-stage blower. If the snow is particularly packed hard, or even frozen, there is a need for heavy-duty “drilling” or cutting through them so they can be collected and thrown away. A two-stage snow blower, with two augers that do the job of breaking up frozen snow, performs this job well. The collection is done by the augers, and the impeller proceeds to jettison the snow through the chute.

They are referred to as two-stage for that reason: the snow is collected (that’s stage one) and then discharged or propelled out of the snow blower (that’s stage two).

Do you need to clear not just a driveway or a front yard, but an entire length of the street in front of your homeIs your area inundated often with heavy snowfall that you even end up calling in the professionals to clear out snow around your homeThen this is when the three-stage blowers come in. These models have three augers, with the third auger acting as a drill, effectively crushing ice into the consistency of a slush, for easier discharge.

These corded units require to be plugged directly to an electric power source, although there have been some models lately that come with a cordless design. Predictably, these models are much more expensive. They are not as powerful as gas-powered snow blowers. However, they are often used in very light snow clearing jobs.

And now we’ve come to the Single Stage Snow Blowers.

When your driveway and the sidewalk leading up to your home is snowed in, and you don’t feel like using a shovel since you know it’s going to be a lot of work, your best bet would be a single-stage snow blower. This model comes with only one auger, so it’s like saying that the entire snow clearing process is packed into a single-stage or step: it simply sucks up fallen snow and chucks it out to the side.

That’s why many prefer to call it a “snow thrower” since that is basically what it does: throw snow out.

First and foremost, you choose a single stage snow blower if you want something the can easily clear fallen and accumulated snow from your driveway or sidewalk, but not as heavy and complicated to operate as a two- or three-stage blower. An electric snow blower is also an option, but it can only do so much. It is also likely to fail in clearing heavier snowfall.

A single-stage snow blower may not be as light as the less powerful electric version, but it is certainly more lightweight than the two-stage and three-stage snow blowers. It is also considerably more compact, since it contains only one auger, while the other two have two and three, respectively. One complaint against three-stage snow blowers, in general, is how they are oversized, so they end up becoming inconvenient when used around the house.

As such, a single stage snow blower is much easier to maneuver, so there is a lower level of physical strain on your body. In the same way, since it is easy to maneuver, you can also go about the snow clearing job that much faster. It is light, so you can finish the task quicker than, say, when you are using a two-stage or three-stage blower where you have to take a rest or short breaks while you’re at it.

The single stage snow blower is ideal in places that get a considerable amount of snow, but not too dense that the snow becomes too heavily packed for the snow blower’s single auger to work through. You have to be realistic about it; if you force your single-stage blower to cut through snow that has frozen solid into ice, you might end up damaging it.

There are several models of single stage snow blowers that have been grabbing the attention of experts and professionals. We are rounding up five of the best.

The superior single-stage system of this Husqvarna model guarantees efficient performance, so snow is fed into the machine, only to be immediately thrown out through the chute. Unlike most other gas-powered snow blowers, you can get it started working right away, thanks to its fool-proof electric starter.

It also comes with a LED headlight, which means you don’t have to wait until daylight to start clearing the snow on your driveway and sidewalk. You can get on it even if it’s still dark outside. Since it is built with semi-pneumatic tires and an ergonomic rubber handle, you can smoothly and comfortably handle and maneuver it.

It may look like your standard snow thrower, but you cannot deny that this single stage snow blower from Briggs & Stratton is a high-performance snow blower thanks to its ability to clear up to 22 inches wide. The intake height is 12.5 inches, which is higher than your average snow thrower.

This is thanks to its 950 snow series 208cc engine, which can produce a great amount of torque to get the job done quickly and effectively. Starting it up is not much of a problem, thanks to its recoil start function.

Weighing only 36 lbs does not make this Snow Joe snow thrower a lightweight in terms of performance, because it has a clearing path of 21 inches wide and 8 inches deep, and can move up to 660 lbs of snow per minute. This is thanks to the stainless steel auger with its heavy-duty rubber blades. Expect up to 65 minutes of quiet and noise-free operation, which is impressive enough of a battery-powered snow blower.

Since it is battery-powered, you won’t have to deal with pull cords and tangled extension cords, unlike in corded electric snow blowers. There won’t be gas and oil leaks to bother yourself with, as you’d see from gas-powered units. No tune-ups also mean lesser maintenance costs.

This Poulan Pro model’s 136cc engine is powerful enough to cover a 21-inch clearing width, and having a 13-inch intake height means it can deal with relatively heavy snow. The auger is very durable and high-performance so gathering snow and throwing it out looks effortless.

The electric starter ensures a smooth start because you will not have to pull the recoil start like it is in most others. Even beginners and inexperienced snow blower users will have an easy time operating it, thanks to its large controls. Even when you’re wearing gloves, there won’t be any problems in handling the machine.

This battery-powered Snow Joe snow blower is ideal for clearing paved surfaces of sidewalks and driveways. If you’re looking for a unit that runs while making a sound barely above that of a whisper, then this will fit the bill very nicely. The battery runtime allows it to work continuously for up to 50 minutes, so you actually get a lot of work done in a short amount of time before you need to charge it again.

The rubber blades work quickly, able to throw up to 495 lbs of snow in one minute. The directional chute has an auto-rotate function and can turn 180 degrees, so you can pretty much have it throw snow in any direction, up to 20 feet. 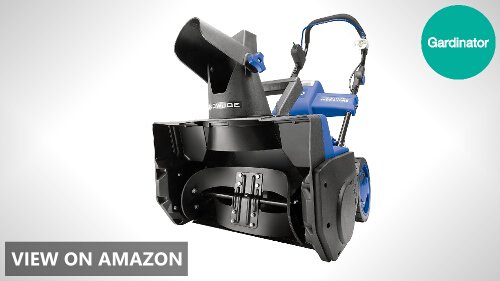 A Buyer’s Guide to Choosing a Single Stage Snow Blower

Just because it is a single stage snow blower and, therefore, more basic than other types, does not mean you should take it lightly. When shopping for a snow thrower, there are several things you must pay extra attention to.

Whether the snow blower is gas-powered, battery-powered, or requires plugging into an electric power source, you should look into whether the motor is powerful enough to take on the clearing job you have in mind. Some brands integrate their own motor technologies in their products, and it certainly pays to do a bit of research on them to see which one would provide more power and performance.

Powerful performance does not automatically mean the snow blower should be noisy. There are models that now offer whisper-quiet performance.

The two things to look at are clearing width and intake height. How wide of an area can the snow blower cut through and clear? How deep of accumulated snow can it dig and break into? You can make an informed choice on which model to purchase when you take into consideration the average amount of snow accumulation you have to deal with regularly.

In the same way, the distance that the chute can throw is also something to consider. The farther it can throw, the better it would be, so you won’t have to clear the same area twice just because it threw the collected snow really close. A throwing distance of 20 feet is a good point to start on.

Aside from the motor, you also have to look at a couple of other parts of the machine. Single stage snow blowers only have that one auger, so make sure you get one with a highly durable and reliable auger. You don’t want an auger that easily breaks at the slightest difficulty. The rubber blades should also be durable enough to wield enough power to propel the collected snow out of the chute.

For easier and more convenient handling while in operation, ergonomic design is what we all should look for. Depending on the snow clearing job at hand, you may have to spend more than half an hour or sometimes even two just trying to clear all that snow. That’s quite a long time, so you want a unit that is designed to be wielded for prolonged periods. Otherwise, you will end up having aches and pains all over your body.

Comfortable grip is also another thing you might want to look into. If the handles have some cushioning, maybe a rubber or something similar, you’d subject your wrist and hands to lower fatigue. Even if you wear gloves, if you handle a snow blower for more than a few minutes, you will still feel some of the impact, so getting one with comfortable handles is a good idea.

Keep in mind that you will likely operate the snow blower in cold and sometimes even harsh winter conditions. That is why you have to make sure you get a unit that is durable and sure to last you a long time, with proper maintenance. The parts have to be made of high-grade materials and won’t break down easily. Most importantly, they should still remain in good condition even after being put in storage over the summer.